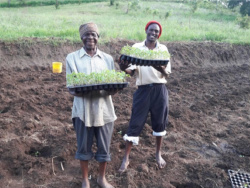 Twahiru Buni Kaniki (42) is a farmer from Mbuzii-Soni village, Lushoto District, who had been exclusively growing maize and beans since 2000 until recently. He has now included growing tomato, sweet pepper, cabbage, onion, cucumber, eggplant and carrot.

Twahiru Kaniki was informed about SEVIA through his neighbour, Silas Abdallah Mdoe (69) who hosted a SEVIA tomato demo as from April 2017. “I was so impressed with demo results compared to what I observed in other farms around and that was my turning point. I thought I had to shift from cereal crop production only to including vegetables”, he said.

He hosted a tomato demo of his own, starting in October 2017. The demo performed well, given support from Joseph Masethya (SEVIA extension officer) and his mentor (Silas). He planted other vegetables. Through farmer-farmer knowledge transfer, Twahiru Kaniki continued to obtain good results from his vegetables. He managed to buy a cow from the sale of his produce and is planning to build his own house in future. “The right time to excel is taking the opportunity that is ahead of you. I am glad that I got one from SEVIA and my neighbour”, he proclaimed.

Asked about his future prospects, he smiled and said, “I am not really where I want to be but SEVIA showed me a bright way ahead and I am pleased to have a mentor who can assist me all the time”.