The use of organic pesticide 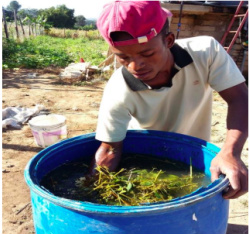 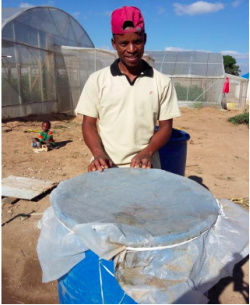 “I use organic pesticides because they are cheap”, says Jecha Katanzi (29) from Iringa Municipal. Since 2012 he has been growing sweet pepper and tomato, following the example of his sister who is also involved in vegetable production.

Jecha also learned about organic pesticides through discussions with Wilfred. “I decided to start using organic pesticides; mainly because of the low costs compared to chemical pesticides. Other advantages are that the organic pesticides can chase away more than one species of insects and are not dangerous to humans. Moreover they can be made from plants that grow everywhere.”

Jecha has been using neem extract for controlling insects since January 2018. He sprayed every 5 days. He started harvesting his sweet pepper crop in April 2018.

“I used chemicals in the past but I am happy to see the positive impact of using organic pesticides”, he says. “My crop looks very healthy.”